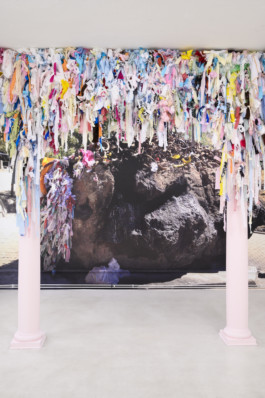 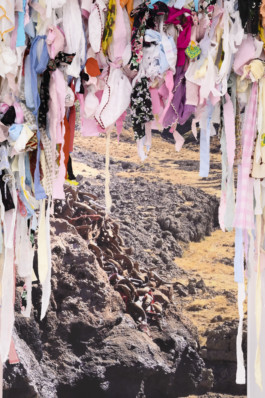 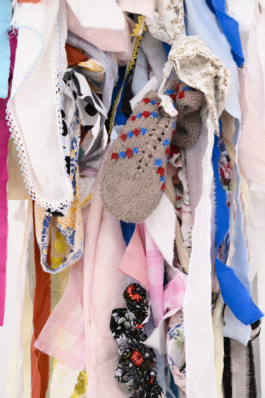 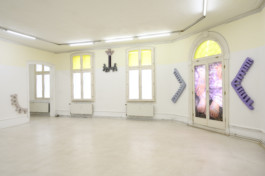 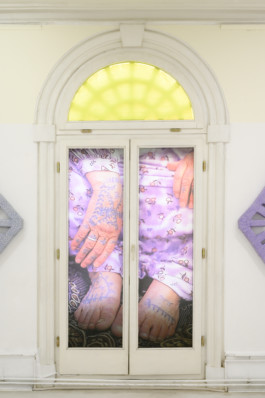 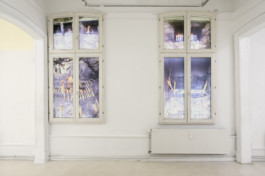 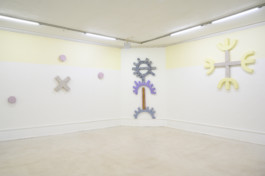 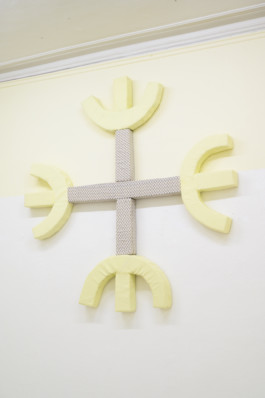 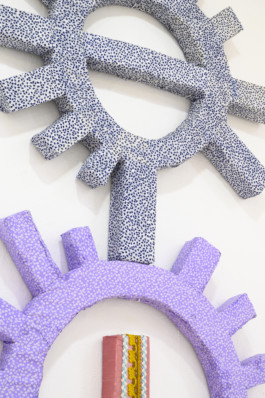 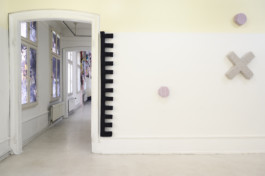 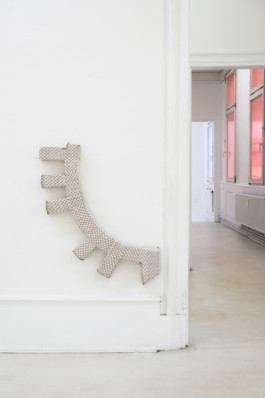 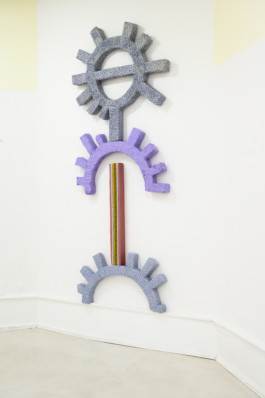 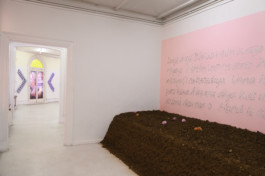 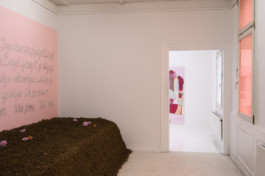 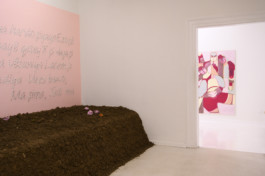 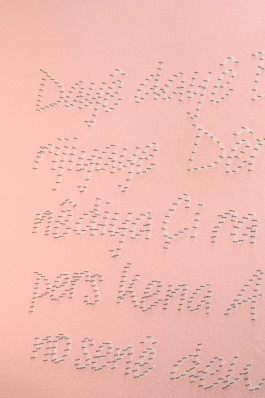 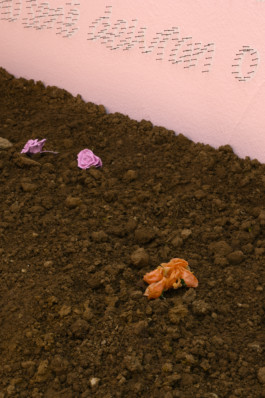 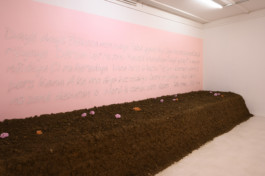 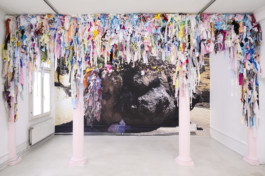 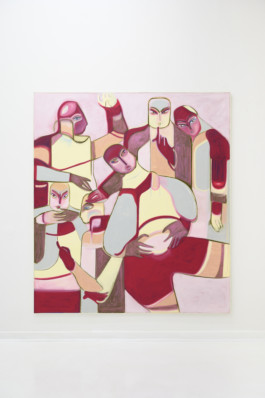 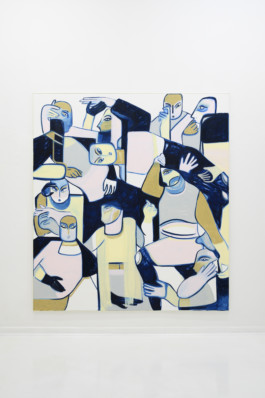 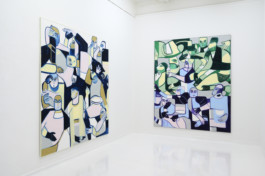 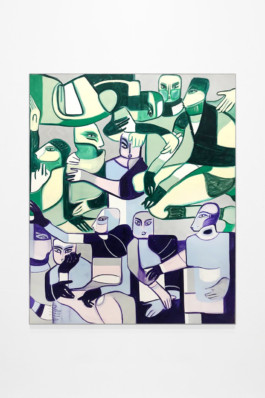 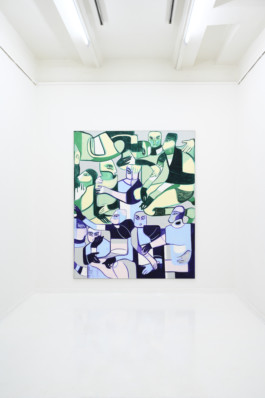 no friends but the mountains
Kunstverein Göttingen
2020

No Friends but the Mountains is a solo show of Melike Kara‘s work surrounding her Kurdish-Alevi family‘s traditions and stories, told through photography, painting and installation. The use of personal ex- periences, cultural traditions, rituals and historical events, helps her to question the meaning and significance of memories to our existence and the way in which the past convolves into the present.

The Kurdish saying No friends but the mountains is eponymous for the exhi- bition. It is a reference to the history of the Kurdish population, who, as a people without land, were repeatedly driven out of the areas they inhabited in todays Turkey, Syria, Iran and Iraq and who are still striving for self-government and autonomy today. The geographical location of the mountains served them as a retreat and hiding place. At the same time, the Alevis in particular, have a strong religious and spiritual attach- ment to the mountains.

The installation düzgün baba (2020) was developed for the space, citing a pla- ce of pilgrimage atop a mountain plateau that goes by the same name and which is situated near the city of Nazımiye in ea- stern Turkey. It is named after the legend of shepherd Shah-Haydar, who is said to have had miraculous powers. The local people later gave him the name Düzgün Baba. Düzgün Baba is thus person and mountain at the same time, combining nature and religion, as is typical of the Alevi faith. The large-format photograph attached to the wall depicts the pilgrimage site situated at the top of the mountain. Kara took the photo, whilst on a journey with her grand- mother, who grew up in the region and who- se ancestors were well-known shamans closely connected to the site. Together, they participated in various rites and traditions during their trip. On the rock depicted, the believers lay down the horns of sacrificed animals or attached an object or a piece of cloth to it. These offerings are representa- tive of wishes and prayers. As part of the in-situ installation Kara compliments the photograph with knotted textiles she inheri- ted from her now deceased grandmother.

In the installation diaries (2020), Kara focuses on the so-called „deq“-tat- toos, which are worn by Kurdish women on face, neck and hands. They are regarded
as jewelry, as a chronicle of important life events and, at the same time, serve as protection from evil spirits and diseases. The depictions of suns, animals or crossro- ads are associated with meanings of joy, healing or individual characteristics of the women. The sculptures hanging in the room show partly rudimentary and rectified forms of these linear symbols and are decorated with different fabrics.

Nowadays, the skin paintings are worn only by the older generations and are thus in danger of dying out as a cultural tradition. In the multi-part work of paintings deq (2020), Kara captures detailed views of women and their motifs collected over the years. Usually only parts of their faces are on show, so that a tension arises bet- ween the gestures of showing and viewing. The differing styles of painting and the increasing degree of abstraction reveals the process of approaching a tradition and shows how memories can change over generations.

The installation Dayê dayê (2020), attempts to visualize the collective pain of a community carried over generations, represented by a grave construction that occupies the space, covered with earth and individual flowers. On the wall behind it, there is a lullaby inscribed in Zazaki, writ- ten by hand and studded with nails, which Kara learnt from her grandmother. Zazaki is mainly spoken by Alevi Kurds in the Dersim region and is being passed down less and less in recent times. The song is about the so-called Dersim Uprising of 1938 and its brutal suppression by the Turkish govern- ment. There were several thousand deaths among the Alevi Kurds, including Kara‘s great-great grandparents.

The three large-scale paintings new beginnings, Over time, and for all what matters (all 2020) show groups of human figures. Kara liberates the characters from social and societal conditioning such as age, origin or gender. What remains are gestures, which the figures use to establish connections to one another, and facial expressions, which look directly out of the image at the viewer. The heterarchic composition of the picture allows Kara to give each of the figures and the emotions they convey, such as anger, sadness and joy, their individual place. In the context of the exhibition and in reference to her own history, she traces the connection between social conditioning, one’s own identity and fundamental human characteristics in these figures.