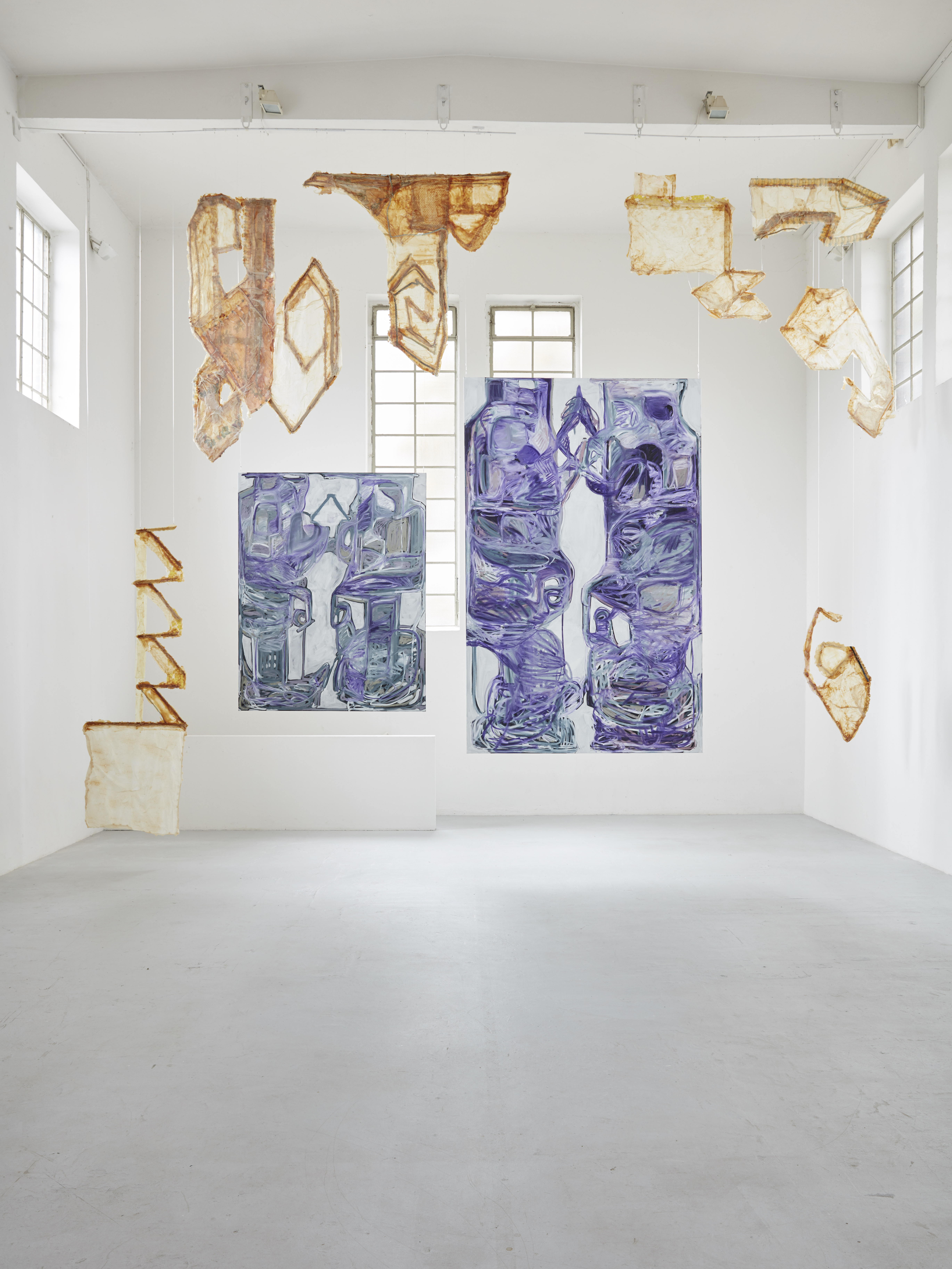 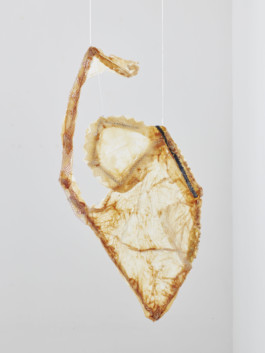 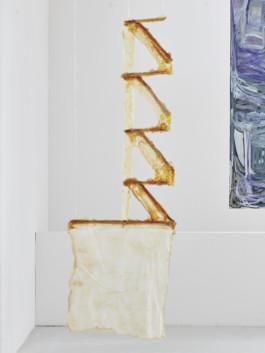 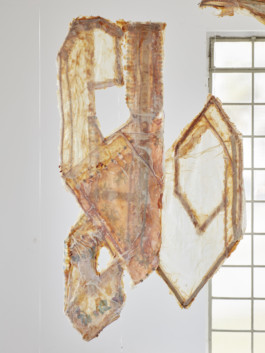 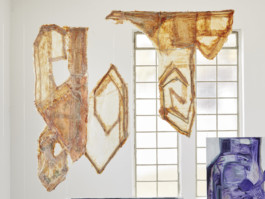 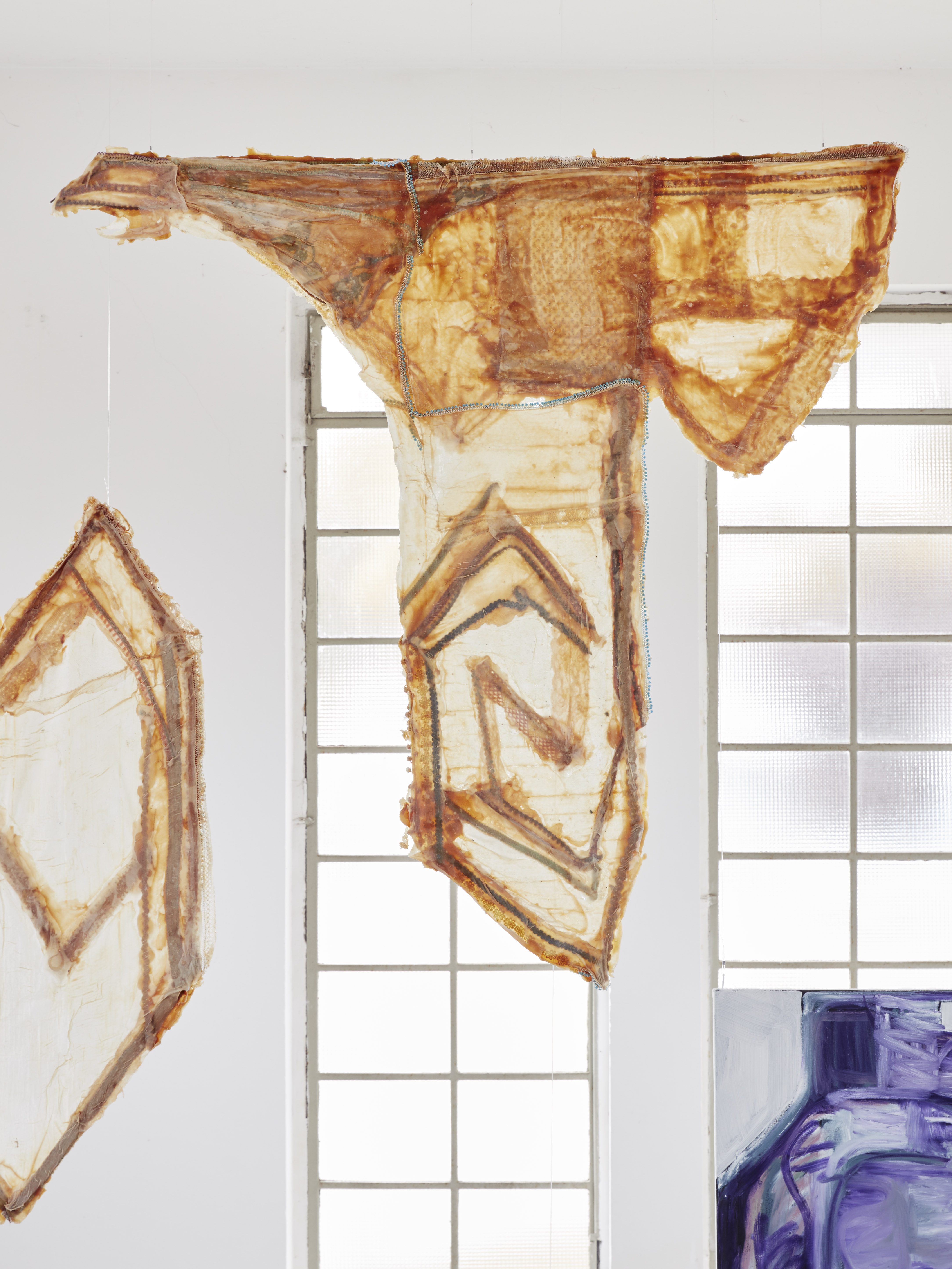 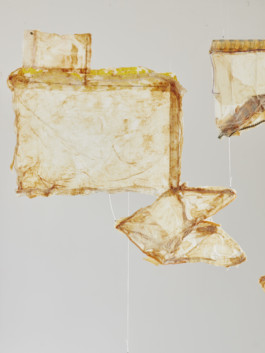 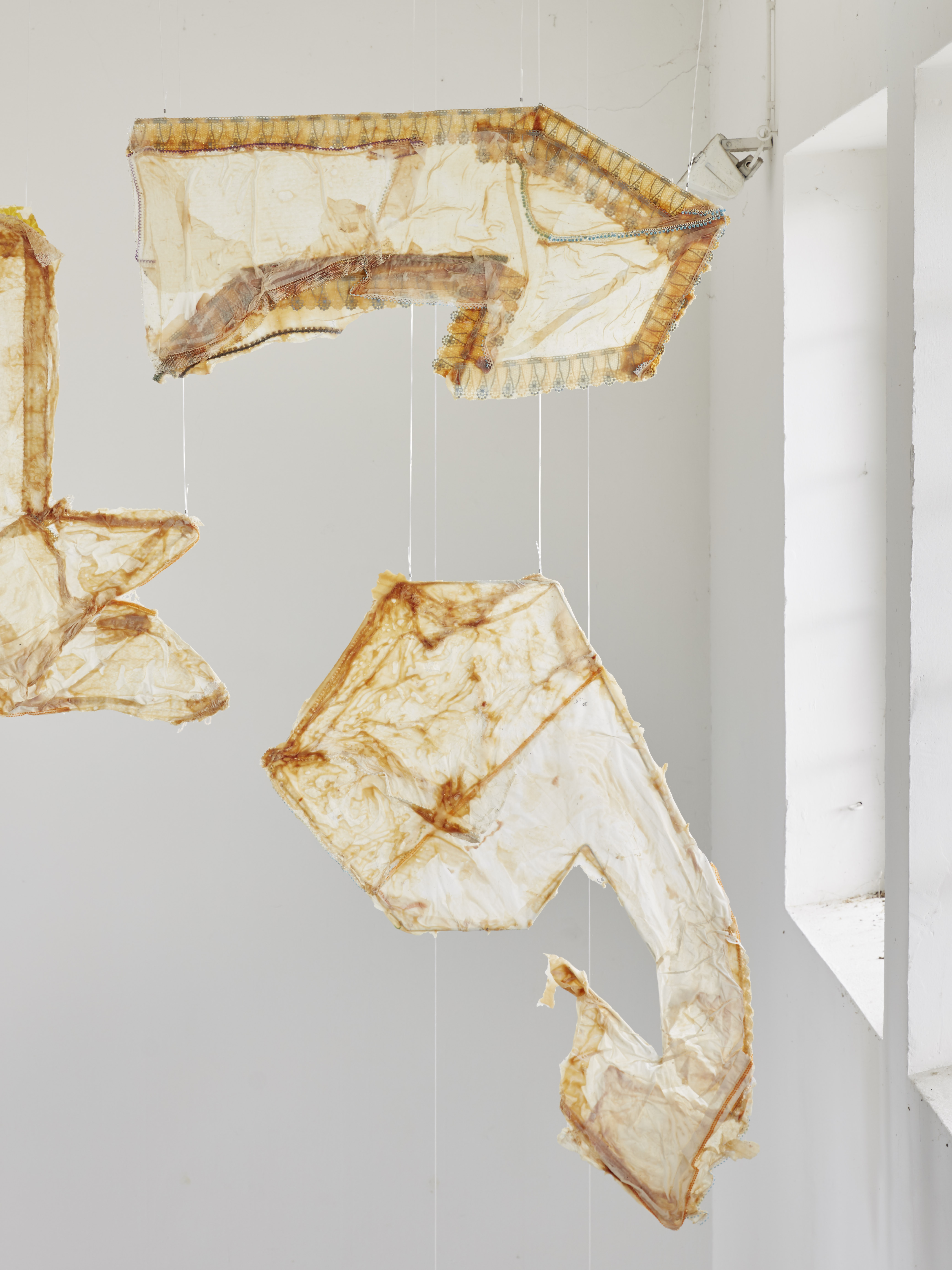 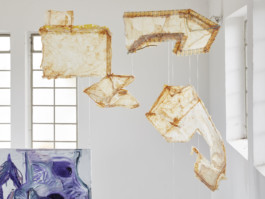 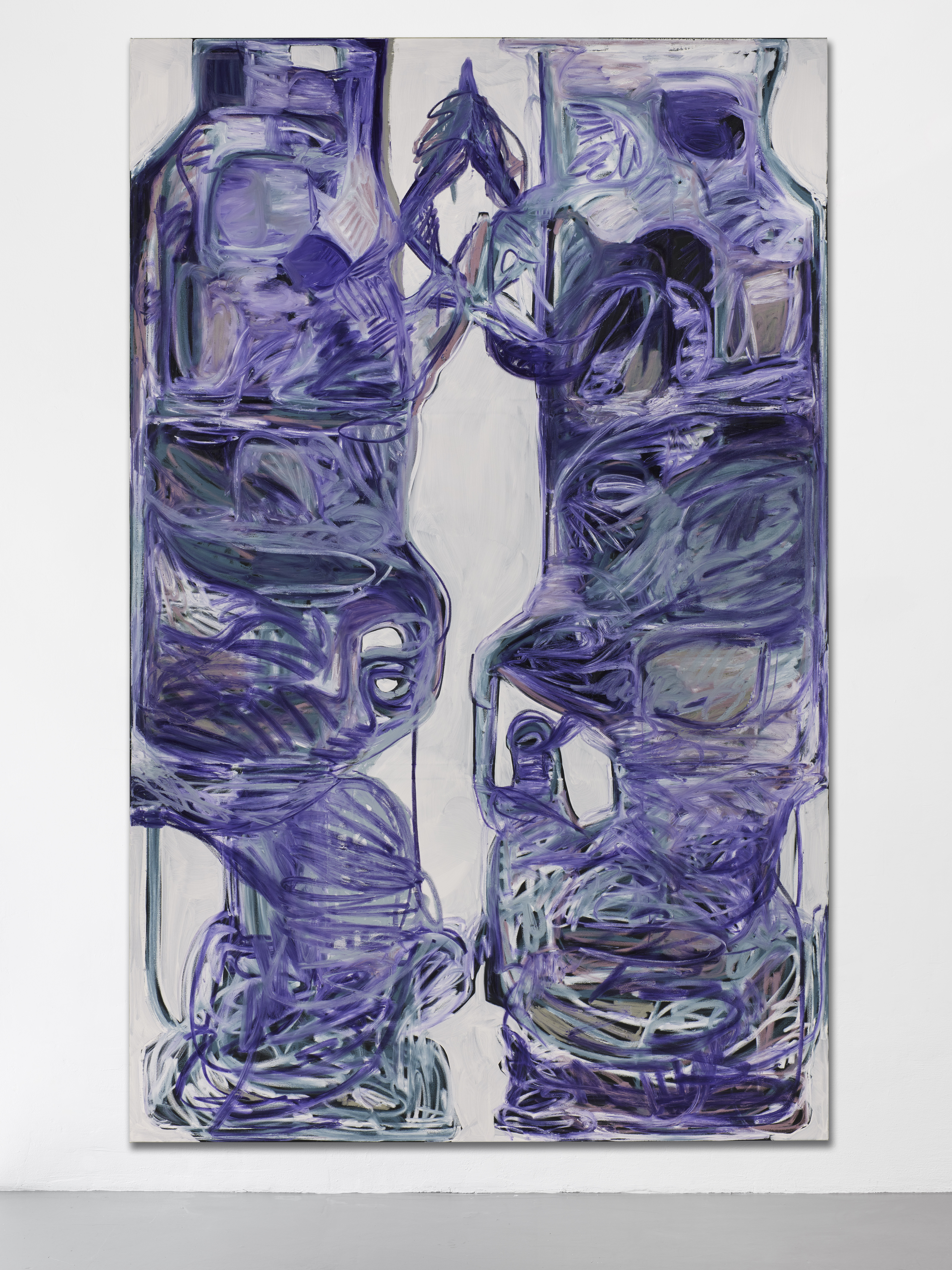 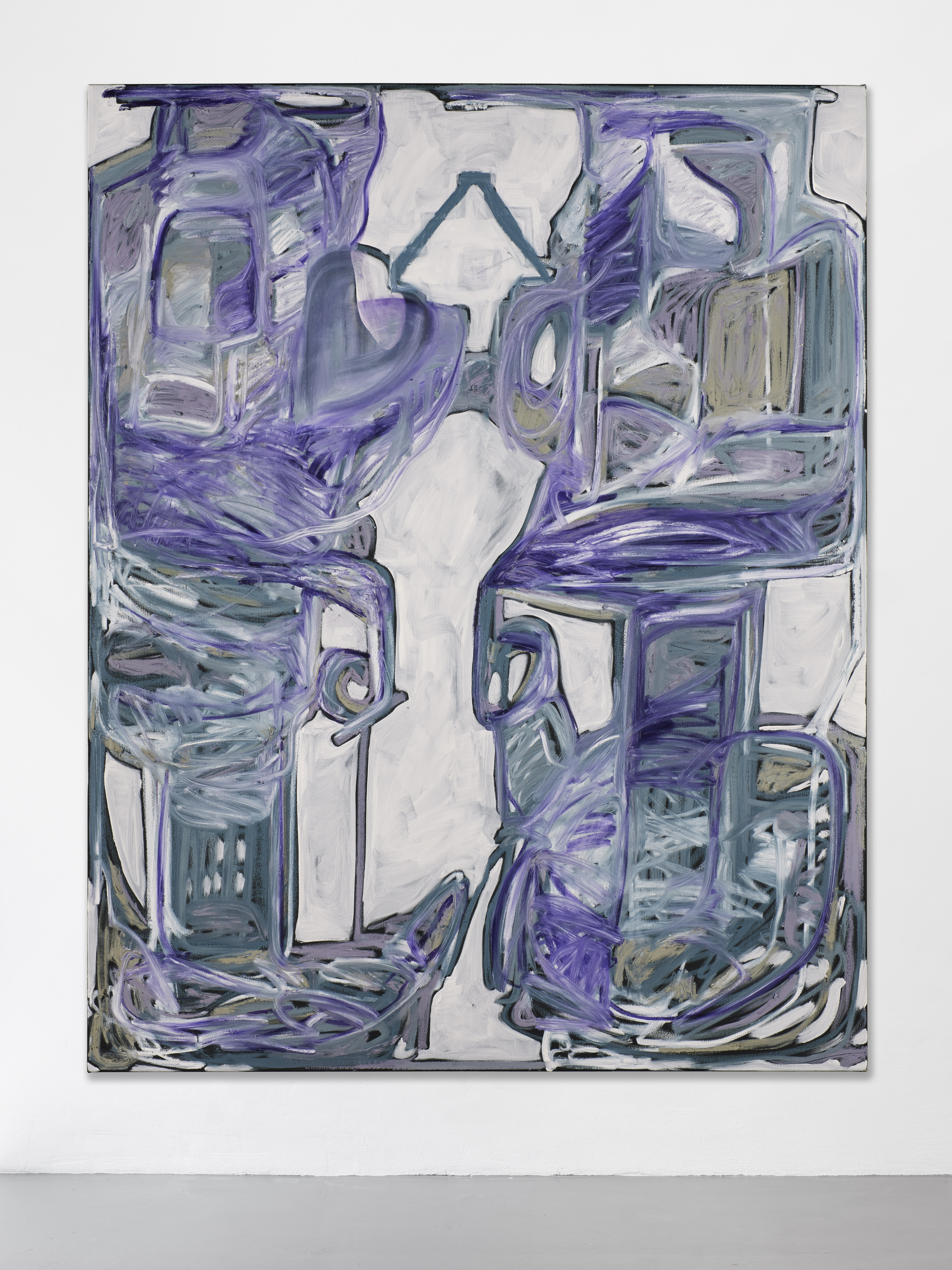 In her works, somewhere in that space between personal experiences, cultural traditions and ritu- als, Melike Kara probes the meaning and signifi- cance memories hold for our existence and how the past further etches itself into our present. In her installations and exhibitions, she combines painting and sculpture, allowing Kurdish-Alevi symbols and tales to enter in as she does this. For her space-filling installation “deste xo bide mi” (2020) on the occasion of the Zonta Cologne Art Award, the artist works with lace and crochet borders of varying color, patterns and width. Coated with latex, they are covered with an irregular ochre brown redolent of skin and aging processes. In the room, the bands connect along a hanging construction to form geometric and ornament-like forms that are also repeated in the paintings. The title of the installation “deste xo bide mi” is in Zazakkî, a language that barely survives today, and means something like “give me your hand”. Zazakkî is spoken mainly by Alevi Kurds in the Dersim region where Kara’s grand- parents come from. Like the lace borders, this language poses a segment of ways of life, whose meanings change or pale over time.

In her works, Kara succeeds in interweaving threads from the past and present to form a new third entity. In grappling with them, thoughts come to mind of Martinique philosopher and lyricist, Édouard Glissant, who with his book “The Poetics of Relation” made an important and poetic contribution to cultural theory. In the book, he compares the personality and identity of a person with the way a fabric weave is regarded at the moment of contemplation, i.e., where it is not the individual threads that stand in the fore- ground, but the patterns and colors that combine to produce an overall image. Following this logic, if we were to selectively extract individual threads when wishing to understand a counterpart, such an act would, above all, reproduce our own view of the world. Instead, each person should be left a possibility of resistance so that the complexity and multiplicity of his or her identity is protected. Glissant calls this the “right to opacity”.

To come up with the forms she created for the installation and her painting in the exhibition, the artist receives her inspiration from Kurdish carpet patterns. Kara takes these ornaments as a departure point for her flat compositions, as is the case, for example, with “Aina kochak and star” (2020). Broad white brushstrokes on a black ground barely yet discernible constitute the background of the painting. Dark lines interrupt the white, form patterns and surfaces or build connections between these. As with her earlier figural paintings, here as well Kara concentrates on a few color spectra per picture, though now she less clearly separates the individual color surfaces from one another. Strokes of oil chalk applied swiftly by hand overlay one another, mixing to become new color tones.

The geometric and ornamental patterns of the carpets are heavily abstracted and only occasionally recognizable; for the most part, they dissolve into curving lines and surfaces. Some of these paintings, which Kara understands as a series, are divided into two parts, and as viewers, we think we perceive figures standing opposite each other. The lines between them seem then like connections or paths, by means of which a mee- ting or an exchange may take place. This exchan- ge is decisive with respect to the question of what it means to deal with traditions and memories.

In the exhibition, Melike Kara connects the individual works to a spatial collage and includes aspects of Kurdish traditions as well as autobiographical elements in her artistic language of colors and forms. The impressive room installations and image compositions invite us to trace the existing fragments of traditions and memories and to reflect upon our own perspective in this regard.