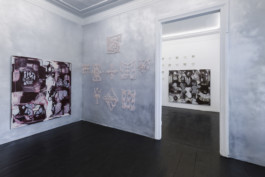 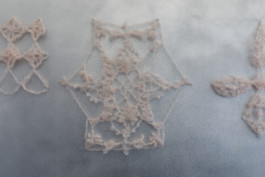 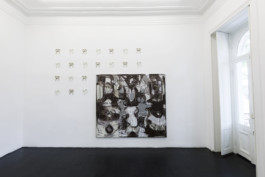 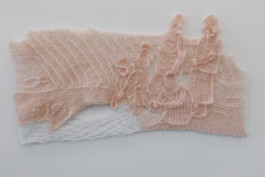 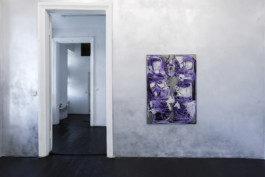 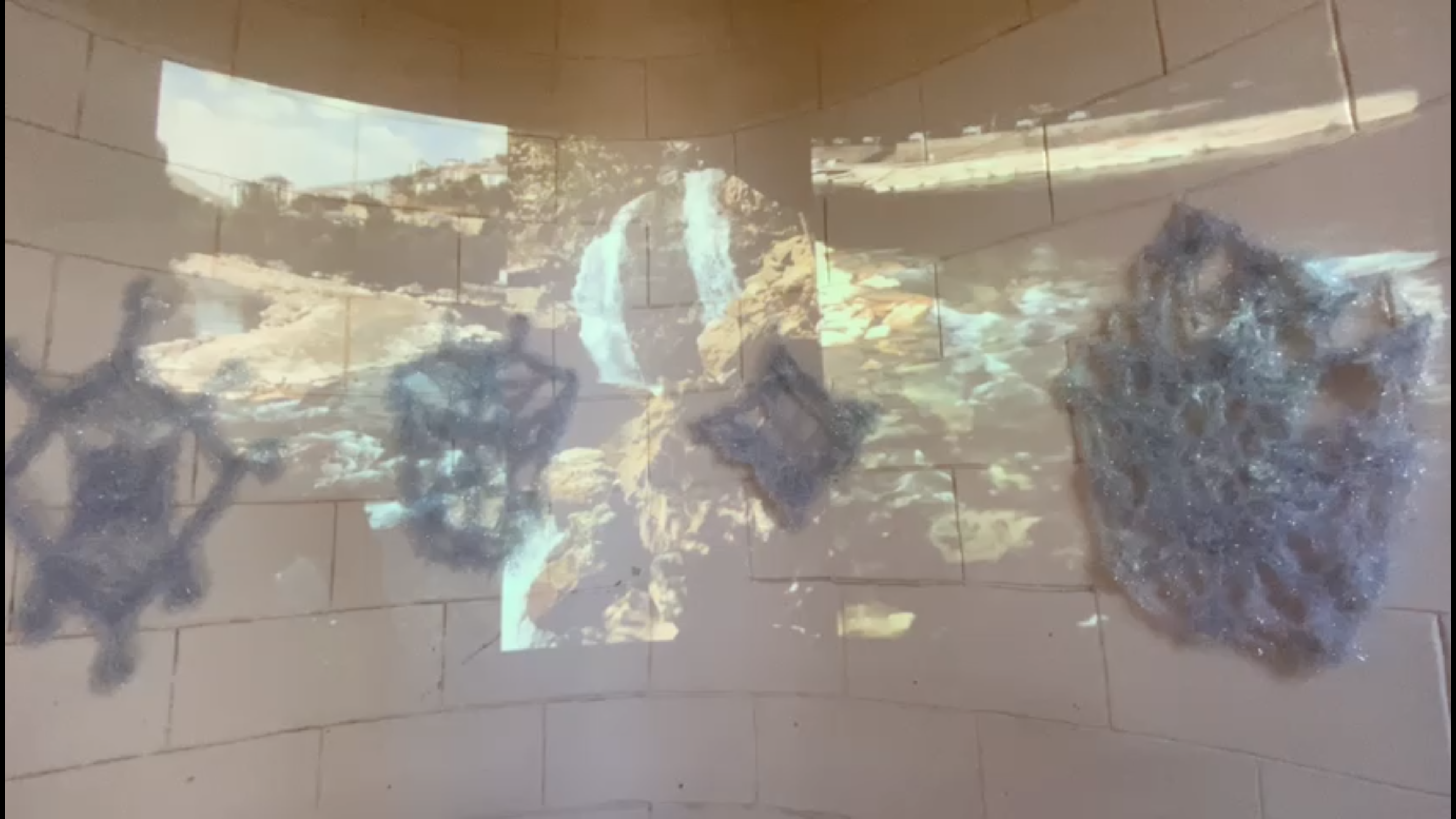 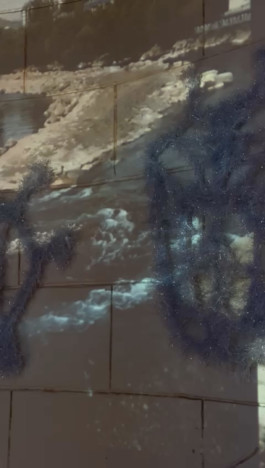 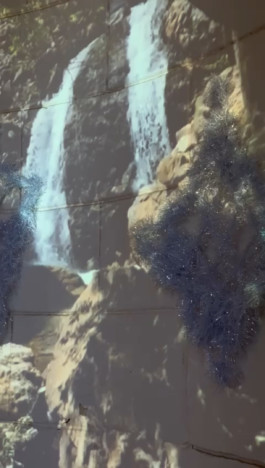 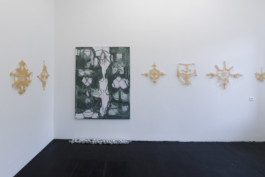 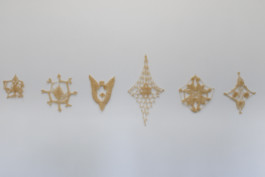 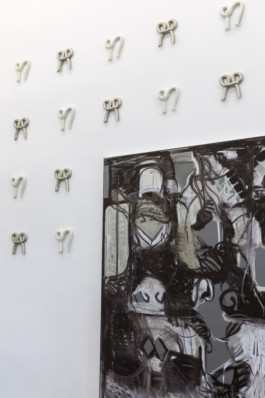 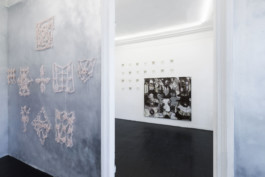 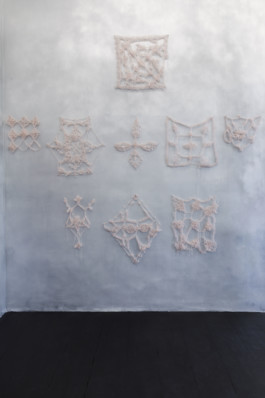 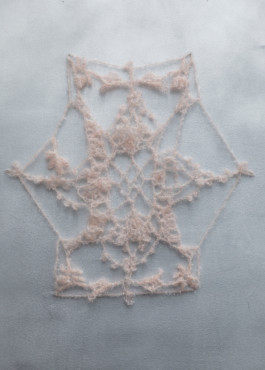 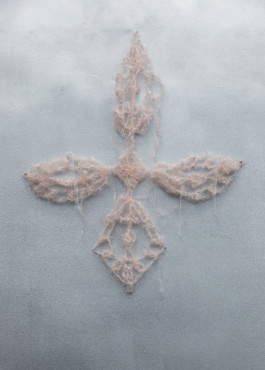 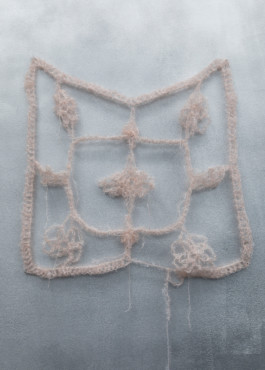 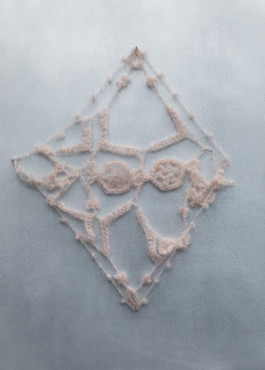 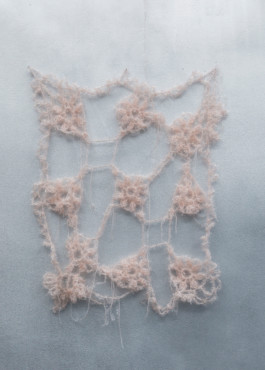 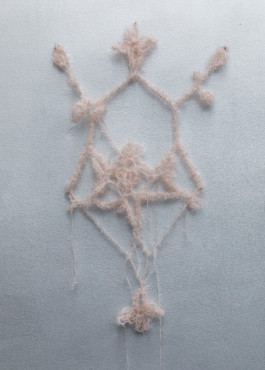 how she shapes us
LC Queisser, Tbilissi
2021

This is Melike Kara's first solo exhibition at LC Queisser gallery, having already been part of a group show in 2018. Under the title HOW SHE SHAPES US, the Kurdish-German artist, who lives and works in Cologne, presents new works created for the exhibition.
Although the artist's primary medium is painting, she expands this in her exhibitions - incorporating the architecture of the space and responding to it with videos, sculptures and installations. The show’s title HOW SHE SHAPES US refers to the river Munzur, which meanders in her family's native homeland Dersim, a region with the highest percentage of people of the Alevi faith in Turkey. The river is a supplier, it "watches over the people," promotes culture and rites, and is at the core of the artist's interest. She speaks of the Munzur as having "gently" shaped the culture of the Alevis over the centuries.

Kara's paintings, as well as her entire body of work, draw on traditional Kurdish patterns and designs. At first glance it may seem that the paintings are abstract, but the artist blurs the line between abstraction and figuration. Here and there recognizable forms can be made out. Some of these forms are reminiscent of limbs, hybrids between stable bodies and dissolution. This also speaks to Kara's interest in the notion of home and questions of origin. In her works she weaves together personal narratives, fates, traditions and rituals. A personal network of connections emerges. In these connections, abstraction is synonymous with the condition of the Kurdish people, a reality of danger and violence. Her works, as personal as they are, become an expansion of her family and also of the Kurds. She works actively for remembering and not forgetting and creates a very artistic, but all the more powerful, form of opposition.

Kara looks at the Munzur River in Dersim, the aforementioned home of her family in eastern Turkey. The river in the Kurdish province is a sacred place for the Alevis; the legend of the humble shepherd Munzur, who lends his name to the river, is one of the most meaningful within the local culture.* As the Alevis are a persecuted religious minority, the river becomes a political site. The Turkish state has been working for years to build dams in the province, even though there is no real evidence that the construction has the advertised economic benefits. Rather, it is about political influence and the damage to Kurdish and Alevi culture caused by the construction. Flora and fauna will be destroyed, as well as villages, pilgrimage sites and cultural places, not to mention human lives.

Kara has developed her own artistic and poetic way of addressing the culture and memory in sites such as these; her works are both symbols of an ancient culture and a statement against the fading of the past in our present, where despite enormous social progress, the worldwide persecution of minorities is still too often overlooked. Thus, the exhibition studies the cultural structures that have evolved through the river and shows what is being lost.

The video work projected in the gallery's entrance features short clips of the Munzur River, the original footage taken with a cell phone. Kara’s relatives who travelled in the region have been sending these recordings in the family group chat for years. Also seen are ritual bags filled with debris from the Munzur. Kara's mother, who was recently visiting the region, brought these back with her. These bags are a ritual in themselves, as they had been made by Melike Kara's grandmother, filled, blessed, carried and passed around. Further fragments of crochet pieces, explicitly not finished, refer again to the dissolution of a culture, extending the curtain into the room. Kara repeatedly works with photographs from her own archive. These photographs, most of which come from various relatives, are on the one hand a very personal history of Kara, her family, and friends. At the same time, because there is no state historiography of the Kurds, the private archive takes on public implications. In past exhibitions the artist covered whole walls with the pictures, installing paintings on top of them. But in this show there is only one she refers to: a photo that shows Kara's aunt and another woman washing dishes in the river Munzur. Fragments of this picture are crocheted. The picture itself has a special meaning to the artist, as it depicts her aunt, who now lives abroad and whose access to her homeland, and the Munzur that she loves, is limited.

Then we see a selection of paintings that, contrary to a traditional figure/ground hierarchy, have been worked in part abstract and in part figurative forms. The color palette seems reduced and pastel. From green tones to pink tones to darker purple tones and non-colors such as black, white and the achromatic gray. The patterns we can make out relate to personal and family patterns and ritual objects of Kurdish culture. At the same time, they might remind us of "abstract" landscapes when we look out of the window of an airplane, for instance. In part the landscape imagery seems natural, in part manipulated. Even if the reference is clear, these paintings could also be a "map" of an area where culture has overpowered political corruption, and the environment is not under threat. After all, water is the origin of life and perhaps also the memory of our planet, one that never forgets. The Munzur river is an essential part of the Alevi culture and memory. It is a spiritual place that has shaped a faith community, just as it has shaped the landscape of Dersim. Just as water finds its way, just as this river alters, touches and deforms the landscape, so does humanity and its history. From generation to generation "flows" the river of time.

* Together with the Düzgün Baba legend, the Munzur legend is one of the most famous Kurdish tales. Munzur Baba is a shepherd in the mythology of Dersim. He is the namesake of the sacred river Munzur, one of the headwaters of the Euphrates.
Munzur was a humble shepherd who lived in the house of an Agha, a landowner. One day, the Agha went on a pilgrimage where he felt the desire to eat helwa, a traditional sweetmeat. Munzur sensed the Agha's desire and shared it with the Agha's wife. At first, she thought, “Munzur wants to eat helwa, but he does not dare to tell me.” Finally, she cooked helwa and gave it to Munzur.
When the Agha was praying at the shrine, he turned to his left, Munzur was standing next to him and said, “You wanted helwa. Here you go.” He handed him the helwa still warm from the oven. Confused, the Agha turned briefly to his right, and when he looked back, Munzur disappeared just as suddenly as he had appeared.
After the pilgrimage, the Agha returned to his village, where a crowd met him to greet him and kiss his hand reverently. The Agha, however, said, “Do not pay tribute to me, but to Munzur.” And he told what had happened to him in the holy place. Immediately the people went in search of Munzur, who was milking a goat. When he saw the crowd coming, he jumped up in embarrassment and ran away with the milking bucket in his hand. The people, however, chased after him. In his flight, the milk was spilled, and forty drops fell to the ground, from which forty springs sprang. Munzur himself disappeared.